In September, my son will marry a young lady I can’t wait to claim as my daughter-in-law.

Earlier this year, we reserved the Historic Myrtle Beach Train Depot for the rehearsal dinner.

But the COVID-19 situation threw the proverbial spanner in the works.

Things to do with the rehearsal dinner have been modified. With our group, I figured the venue was more than big enough for social distancing.

We plan on having food catered in, along with beverages…

I just got word that the maximum attendance has been reduced, which would mean slashing attendees to the bare minimum – to include only the wedding party, parents and key family members.

If we don’t do this, we’ll have to consider other options for this event.

Thing is, nobody knows what’s coming down the pike as far as COVID-19 in September. For all we know, the city (Myrtle Beach) could shut down again – or things could improve. If things get worse, this means that restaurants could close – or at the very least, they might also adopt maximum capacity guidelines. They might be forced to go back to curbside service, which opens up another Pandora’s box: Could caterers be shut down?

Such is the uncertain nature of our world at the moment.

My guy at the Train Depot has canceled events for a good chunk of September – but each of those parties expected 100 or more people to attend. He has held off on canceling us outright but will likely be forced to do so if we stay at our projected attendance.

The son of dear friends got married in Pittsburgh in April. We watched the livestream. Empty church except for essential people. I am not sure what they did about the rehearsal and other related pre-wedding parties or the reception – but I can bet that they didn’t see this coming when they set the date.

My son served in the US Marine Corps. There is a saying he taught me: “Semper Gumby…”

Well paint me orange and call me Pokey. I had better start stretching – and stop overthinking.

NOTE: I wrote this post on July 23. As of July 24 – we are moving all rehearsal dinner festivities to an outdoor location perfectly suitable for the event, thank God. It was the perfect solution – and one we wouldn’t have thought about until the bride-to-be messaged us about the possibility.

And since there are no coincidences, I read an article today in Success Magazine that featured an Icelandic saying – and by God I needed to see that:

Þetta reddast… everything is going to work out, or something like that.

Sunday, I bid my son farewell before he headed back to base in Virginia.

Wes had been overseas for seven months, and was able to spend the past two weeks on leave here in Myrtle Beach.

As he pulled away, the reality hit me again, as it often does, that my son is a United States Marine. A Devil Dog.

I was also astonished to think about all he had done in the time he was here – a testament to squeezing as much enjoyment and quality time that you can out of a limited visit to a particular place.

The iffy thing for parents, spouses and loved ones of active duty servicemembers is to nail down exactly when they will be arriving, despite what they tell you. We have all heard horror stories of military delays, last-minute changeups and other logistical snafus. This can suck when it comes to airline reservations – particularly because there is really no way to get the best deals – not only for the servicemember, but also for family that might also want to fly in.

In this case, that family is my daughter and his twin sister, Taylor, who flew in from New York City the following weekend.

An outstanding group of friends from Tinder Box Myrtle Beach rallied as well – and we had an impromptu reception at our humble apartment here in Myrtle Beach afterwards.

I am beyond grateful to Stephen Shuessler of CrossFit Myrtle Beach for putting the word out at his box [CrossFit lingo for gym] – and helping to gather a group of Wes’ CrossFit family. It warms my heart to feel the love.

His Uncle Chris [my twin brother and musical accomplice] and Aunt Betsy [my sister-in-law] were there also – as well as Wes’ best friend and de facto brother, Xavier Pringle – and we wore the amazing tee shirts my dear friends Tonya and Kenny [A Plus Screen Printing] made for Wes’ graduation at Parris Island 16 months ago.

Here’s a laundry list of what he was up to:

CrossFit. A half-marathon in his 30-pound flak vest, or Modular Tactical Vest [I guess he did want his MTV]. Multiple trips to Chipotle. A dinner out, looking awesome in his Dress Blue Deltas. A walk on the beach with yours truly and his twin sister. A jaw-dropping new tattoo from the master, Shay Haf-Ded, at Red Raven Art Company.

The young man took the time to catch Yale Brothers gig at Liberty Brewery and Grill in Myrtle Beach. That meant a lot. We dedicated the night to him and he was received enthusiastically. 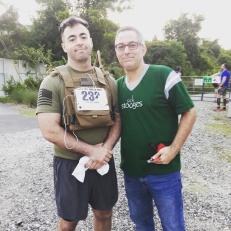 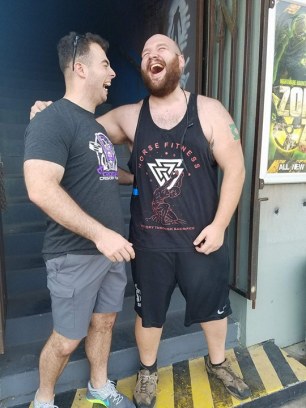 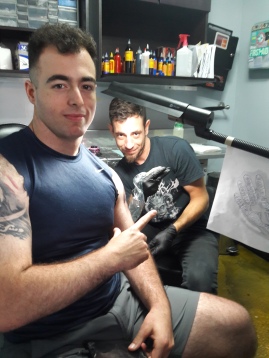 I had a bet with my girlfriend Brenda as to how long it would take before he and Taylor bickered about something. Answer: Not long – and it was music to my ears. Being a twin myself – I understand the dynamic. The old cliché’ stands: They might bandy about all day – but don’t get it twisted. They have each other’s backs.

My regret is that Taylor’s job required her to be back in The City – and she was only here for a weekend. But she was here, and that was awesome.

My adult children. Who knew?

My main man. My son. My Marine.